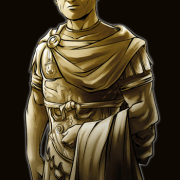 After the Queen of Egypt, today it is the turn of the most famous consul of the Roman republic…

As a sharp strategist he entered the legend thanks to his military victories. In Mare Nostrum,  Gaul will not  be at the center of his concerns. Jules Cesar will have to struggle with eastern civilizations.

Of course, Cesar gives to his troops an offensive bonus that will help them to attack the most powerful armies. Neighbors will keep worrying about a possible Roman invasion, coming for plunder, occupy or annex to the Roman empire. Indeed Romans never stop claiming that Mediterranean see is: MARE NOSTRUM !

Concerning the game’s development, we are at the ended phase. It remains still the edition work. As for FIEF,  we have published a Facebook page for Mare Nostrum. We invite you to like it in order to keep in contact with the game’s news (picture, information, and so on).

Suivez-nous !
Greeting from the Queen of Egypt